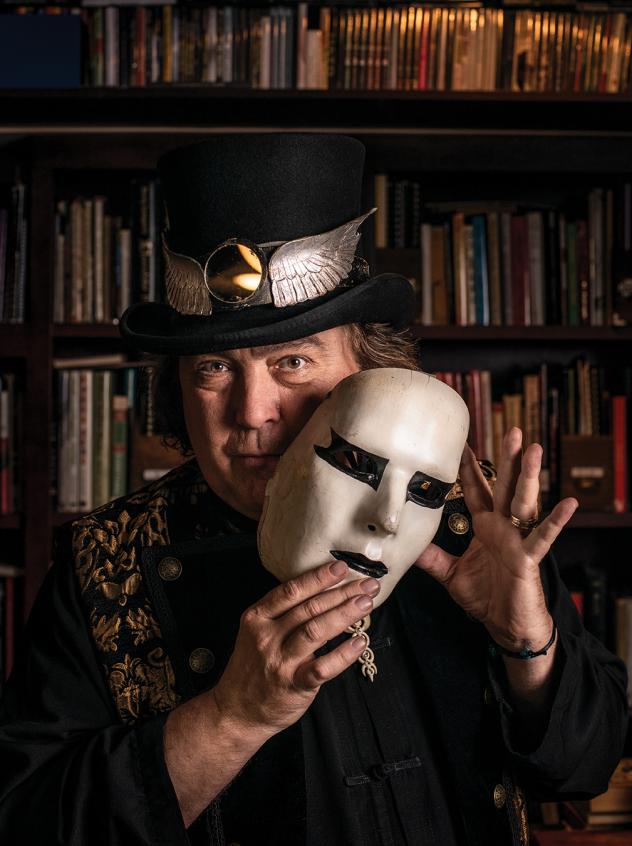 Profile: A Conjurer of Magicians

Jeff McBride is more than a skilled performer of magic. He’s also perhaps its best teacher

The master dresses in a flowing black robe. There’s a subtle showmanship to the way he points a finger or flicks a wrist, his delivery marked by expectant pauses, the way he fixes you with those penetrating brown eyes. Remember, though, don’t linger on his face — that’s just what Jeff McBride wants. Keep an eye on those hands. Always watch the hands.

The veteran magician has set numerous Guinness World Records for his dexterity, like rolling a silver dollar through his fingers 31 times in a minute. One gonzo ruse involves an entire deck tumbling from his mouth. A scholar of magic who owns one of the nation’s most complete libraries of his art form, McBride performs worldwide and has lectured before the International Brotherhood of Magicians — the Smithsonian, too — detailing the arcane history of magic and theater, as well as their applications in everyday life.

On a recent night, the 59-year-old is doing the thing he perhaps loves most: mentoring young magicians, lending a practiced eye to their timing and delivery. He introduces the evening’s cast of 10: There’s Rick Maisel, the escape artist; card shark Jeff Lockett; Will Bradshaw and his dancing cane; Cuba-born Jarol Martin, who conjures up entire floor lamps.

“You may have seen Jarol on the show Masters of Illusion. He did the lamps,” McBride says to Tetro, a fire magician who will soon appear on the same show.

They’ve all gathered inside McBride’s sorcerer’s lair of a home. Red curtains drop from ceiling to floor, framing a scene rife with incense and an ambient mystical backbeat. The lighting is low, windows covered to keep secrets unrevealed. Masks leer from corners. Even some of the chairs are gothic. The magicians, of course, feel right at home. Now it’s time to go to work.

For 18 years, McBride has used the room for his Magic and Mystery School, considered the foremost teaching institution on the art of stage magic. He tutors magicians worldwide, by Skype and through video consultations on The Locked Room, a private internet site. But how do you help promote the next generation of sleight-of-hand virtuosos in a city that’s considered the very capital of magic — a place overcrowded with talent, including the craft’s high-wattage performers?

More than a decade ago, McBride founded Wonderground, a once-a-month public showcase in which practitioners experiment with new material before an audience of colleagues and dedicated fans. (Sometimes, headliners such as Mat Franco, Lance Burton, and Criss Angel perform unannounced sets, too.)

The three-hour show at The Olive Mediterranean Grill is a virtual magic salon that combines stage performances and dancers with close-up card tricks, tarot readings, jugglers, and fire-eaters. Each month features a fresh lineup. For magicians, the scene evokes an intimate jazz club, where they reveal acts they’ve been woodshedding for months, even years. McBride likens it to a gym for magicians. For the performers, the stakes — and the pressure — are immense.

The night before, McBride collects the cast at his home for last-minute fine-tuning. He announces each to polite applause, offering technical pointers and emotional support.

One by one, performers do five-minute acts from a one-step-up dining room that serves as a stage, their peers sitting on folding chairs, filling out comment cards before McBride weighs in, sometimes videotaping acts for further study. The room is tense. This crowd can spot the smallest flaw. McBride tells performer Joan DuKore to articulate her words, even with a pack of cards in her mouth. One novice tips his hand to a trick and collapses sadly onto his chair as his peers lend support. “You won’t be the first person to mess up a magic trick,” says a performer named Bizarro, “and you won’t be the last.”

When Martin, the lamp-conjurer, finishes a new act involving color-shifting scarves, the master offers a silent thumbs-up, making him blush with pride.

McBride was raised in New York’s Catskill mountains, where a borrowed library book became his Bible, his how-to guide to fathom the impossible: The Golden Book of Magic, by The Great Merlini. “As a third-grader, it set my mind on fire,” he recalls. “Kids look for empowerment, and I had it early on.” His first trick, one that remains in his repertoire, involved passing a pencil through a handkerchief, which he attempted without reading the entire chapter. He ripped the hankie, crying “No, no, no,” as he tried to pull it back together. He got better, working resorts around the Catskills, where he was spotted by a talent scout.

After that, he appeared on the TV show What’s My Line? Eventually moving to Manhattan, McBride did street performances and worked at Flosso-Hornmann Magic, a shop once partly owned by Houdini himself. At night, he studied at the American Mime Theater and, at 19, got a regular gig at a joint called Club IBIS. He later opened for Diana Ross at Radio City Music Hall. In the mid-1980s, McBride moved to Las Vegas and performed at such venues as Caesars, the Hilton, and the Golden Nugget.

Burton says McBride holds a special place in magic. “He’s not only a first-rate magician but an organizer who’s created an entire magic community which a lot of people, including myself, are excited to be a part of.” Former protégé Mat Franco still shows up at McBride’s classes. “Jeff doesn’t just teach, he gives people confidence in what they’re doing,” he says. “They’re life lessons, not just magic tricks.” Even David Copperfield weighs in: “Jeff McBride possesses enormous skill and knowledge of our art.”

John E. McLaughlin, who in 2004 briefly served as acting director of the Central Intelligence Agency, says the magic that McBride instructs is at the center of spycraft, pointing to a Cold War-era booklet called The Official CIA Manual of Trickery and Deception. Now a magician himself, McLaughlin lauds McBride’s scholarship. “If I have a question about magic, he either knows the answer or how to find it, from the history to the deeper meaning of the art form.”

For decades, McBride studied under Eugene Burger, a religious scholar known for his close-up skills, who taught at McBride’s master classes until his death in 2017. “He made magic relevant to life,” McBride says, “more than just some trick or puzzle.”

Burger also instilled in McBride the joy of teaching. “At a crucial part of my career, I was burning the candle at both ends. Eugene showed me how to burn out one end and use it to light someone else’s candle, without extinguishing my own light.”

The performers arrive hours before the 8 p.m. Wonderground show, gathering amid the couches and chairs arranged around low tables, where customers will later eat, drink and smoke from hookahs under red-tinted lighting. They discuss their mentor.

As a boy, Tetro saw McBride perform on TV and decided, That’s what I want to do. Years later, the teacher took the young performer into his library to help him develop a new illusion. Says magician Will Bradshaw, “Jeff spends more time reading about and performing magic than anyone I’ve ever met.” No wonder the Society of American Magicians voted him into the Magic Hall of Fame in January.

At 8 p.m., McBride is onstage, dressed in signature black, an ornamental red scarf cascading from the back of his top hat. In the first act, five performers — including McBride’s wife, Abigail — perform a belly-dance improvisation as the master works the room. Only when magician David DaVinci, whose tricks feature exotic parrots, drops in for a brief set, does McBride relax. He sits on a couch to enjoy the act, without a shred of envy or one-upmanship. “This is so hard,” he says. “He makes it look so easy.”

McBride’s protégés perform without observable mistakes, making the master proud. When Martin, the illusionist from Cuba, finishes his act, McBride joins him onstage. This was the first time Martin had performed the routine before a live audience, he says.

“I did it well because of you,” Martin responds. “You’re like a hero to me.”

The following night, the magicians gather once again at McBride’s home. Normally, they’d review their Wonderground performances. But tonight, the group wants to help Tetro celebrate his debut on Masters of Illusion. McBride scans his students’ faces, marveling at their chutzpah. “It takes years of practice just to get up there,” he says, “let alone create something original.”

Tetro’s fire-levitation act is short but thrilling. Afterward, McBride pats him on the shoulder. “It looked clean,” he says. The room applauds, McBride the loudest of all.